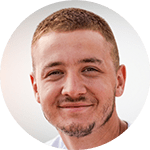 Alexander Barrera is a highly respected and sought-after figure in the cannabis industry. For more than ten years, he has been refining his craft as one of the most knowledgeable growers around - all beginning at just 19.
Expertises: Cannabis, Marijuana, Cannabis cultivation, Cannabis strains

In this article, we look at five of the very best exotic weed strains around, highlighting why they’re unique and why you need to try them.

Overview of the Best Exotic Weed

There are hundreds of cannabis strains in existence. Conservative estimates put the number of strains at around 779, but there could be considerably more as breeders around the world are consistently working to create new, unique strains.

There are many popular, run-on-the-mill strains like Amnesia, Gorilla Glue, Girl Scout Cookies, Blue Dream, and the likes. And then, there are exotic strains that you only come across rarely and are known for their unique genetics.

In this post, we’ll tell you about five of the best exotic weed strains in existence today.

What is an Exotic Cannabis Strain?

A cannabis strain must meet two key requirements for it to be considered exotic. It must be rare and must have a unique genetic trait that sets it apart – maybe its flavor, taste, appearance, effect, THC/CBD level, or something else.

While we must value the uniqueness and importance of the normal strains we are used to, we all crave something exotic that allows us to escape the monotony of what we’re used to and allow us to experience something different.

That’s what exotic cannabis strains provide. Many weed connoisseurs are on a fun and never-ending quest to try some exotic weed strains.

With the proliferation of cannabis dispensaries across the countries, the hunt for exotic strains is more heightened than ever.

There are numerous exotic strains out there, but we’ve whittled down the list to come up with five that you must try.

So, keep an eye out at your local dispensaries for any of the strains highlighted below.

These are the top five most exotic strains in our books.

Snowcap (also known as Sno Cap or SnoCap) is a potent Sativa-dominant hybrid strain. It is a cross between Snow White and Haze.

The breeder(s) behind Snowcap is unclear.

This strain is unique because of its unique aroma and flavor. Snowcap has sweet lemony-citrus notes with hints of earthiness and minty coolness.

Snowcap produces the classic energizing cerebral high that you’ll expect from a Sativa-dominant strain. It barely has a body high so this is the type of strain you can use during the day when you want to stay focused and productive.

This is also one of the reasons why it is a top favorite for wake and bake sessions. It will have you feeling euphoric, creative, and full of mental energy.

Check out more about Snowcap

Bubba Kush (also known as Bubba OG Kush, Bubba, and BK) is a powerful Indica-dominant strain that is known for its intense high and deeply relaxing effect.

This strain is well-known across the world and is always in demand. Bubba Kush was created accidentally in the 90s by Matt Berger.

Berger was experimenting with a phenotype of Kush in his garden, and the plant ended up crossing itself with a Northern Lights strain growing in his garden to create Bubba Kush.

This strain was only available as a clone when it was launched in 1996. It wasn’t until 1998 that the plant was stabilized.

Bubba Kush has a very high level of THC, around 19% to 27%, and a CBD level of less than 1%. It has an earthy, coffee/chocolate flavor with fruity notes and a sweet, spicy aroma.

Bubba Kush has an intense high that will hit you like a ton of bricks and leave you feeling sleepy so beware. It produces a strong relaxing body high and a euphoric feeling.

This is a good strain to use at night or during the weekend when you just want to relax and you don’t have anything to do.

Bubba Kush is recommended for insomnia, stress, anxiety, loss of appetite, and many other conditions.

Malawi Gold is a super rare Sativa strain that evolved naturally in the Salima region of Malawi hundreds (possibly thousands) of years ago.

It is known for its golden buds. This is one of the top-rated Sativa strains from Africa and is one of the most exotic strains in the world.

Malawi Gold has a THC level of around 16% to 18% and a CBD level of less than 1%. This strain has a sweet, woody, and earthy flavor with floral, citrusy, and minty notes.

Malawi Gold produces an uplifting head high so it is recommended for people suffering from mood disorders.

This strain doesn’t make you sleepy or couch-locked. It can be used during the day without any loss of productivity. Malawi Gold is known to boost creativity and leave users with a clear head. It is recommended for chronic pain and anxiety. It is used locally to treat eye infections.

Frisian Duck is a balanced Indica-Sativa strain that is described as a master of disguise because of its deformed leaves, which look like a duck’s footprint.

It doesn’t look like a typical cannabis plant and you’ll have to look closer before you will recognize that it is indeed a weed plant in front of you.

Frisian Duck is a cross between Frisian Dew and Ducksfoot. It is believed to have been bred by the Dutch Passion.

It has a spicy and piney flavor with peppery, woody, and citrusy notes. Frisian Duck produces an uplifting head high and has a relaxing effect on the body (but it doesn’t make you couch-locked).

The euphoric and energizing head high is more noticeable. This is a good daytime strain. It is recommended for headaches, fatigue, stress, bodily pains, and inflammation.

It is thought to be the result of a cross between two skunky strains, possibly Citrus Skunk and Skunk #1.

Some sources claim it is a variation of the Four Way strain. Whatever the case, Lemon Skunk stands out for its bold, lemony flavor.

Lemon Skunk has a sweet lemony flavor with hints of skunky notes. It produces an uplifting head high and also has a euphoric effect.

This is a good daytime strain. It tends to aid creativity and is good for when you want to be in an introspective, meditative mood.

It will make you feel calm and focused. Lemon Skunk is recommended for depression, nausea, chronic pain, stress, and mood disorders.

Things to Keep in Mind When Shopping for Exotic Marijuana Strains

While it may be exciting to try exotic strains, it is important to be cautious as there may be some safety risks involved depending on the way they’re cultivated.

Some exotic strains may be difficult to grow in certain parts of the world – that’s part of their appeal and why they’re considered exotic. So, if you happen to stumble on a rare strain somewhere, don’t be fast to grab it. Here are some things to consider.

Is the grower reputable? It is essential to always buy cannabis from dispensaries that source their herb stock from reputable growers. Some growers try to cut corners and make their plants more potent by using dangerous contaminants.

Researchers have found that some weed flowers on the market are contaminated with pesticides, heavy metals, and fungi. When you consume cannabis grown by a reputable grower, you don’t have to worry about the possibility that dangerous chemicals were used in the cultivation process or that it contains any questionable toxic materials.

Does the appearance of the weed strain match what you expect? There have been cases where sellers (either intentionally or unintentionally) have attempted to pass off one weed strain as another.

So, when you’re shopping for an exotic strain, check online to see images of the strain and compare it to what is in front of you. Also, feel free to speak up and ask questions if you are unsure about the accuracy of the strain or if it doesn’t look as it should.

It is also advisable to use an exotic strain sparingly to test the effect before diving in. Even if you have a high tolerance for THC, some strains may take you off guard and hit you in an unexpected way.

A List of Some Exotic Indica Strains and Sativa Strains

There are so many strains that are considered exotic, including the following:

This is not an exhaustive list of the most exotic strains out there. This is just the tip of the iceberg.

As indicated above, the term ‘exotic’ is highly subjective. A strain that we consider exotic may not be exotic to you.

So, if you find any strain in the list above that you don’t feel deserves the title of exotic, you know why.

A Note on Rare Weed Strains

While Malawi Gold may be considered exotic for someone in the U.S., a breeder in Africa who specializes in growing this strain won’t see it as exotic.

With that said, we tried to make our top five exotic strains as general as possible, but there’s an inherent bias due to the part of the world we reside in and the strains we usually find here.

What type of weed is exotic?

As indicated above, different strains can be considered exotic depending on the part of the world you’re located in and the strains that are generally available around you.

With that said, strains considered exotic usually have a unique quality that sets them apart like their flavor, effect, THC/CBD level, or their appearance.

There are hundreds of exotic weed strains in existence, and depending on who you’re talking to, these strains may vary.

What is the rarest type of weed?

Malawi Gold and Pinkman Goo are two of the rarest weed strains. They have a unique genetic makeup that is hardly seen in other strains. One of the qualities that make Malawi Gold rare is its golden buds while Pinkman Goo releases resin from its flowers.

Finding the best exotic strains can be a lifetime quest. And it can be incredibly satisfying to find a strain that you’ve been searching for.

Every cannabis connoisseur has a bucket list of rare cannabis strains. And thanks to the proliferation of dispensaries, getting your hands on some of these exotic strains may be easier than ever.

Table of Contents show
1. Overview of the Best Exotic Weed
2. What is an Exotic Cannabis Strain?
3. Top Exotic Strains
3.1. 1. Snowcap Strain
3.2. 2. Bubba Kush
3.3. 3. Malawi Gold
3.4. 4. Frisian Duck
3.5. 5. Lemon Skunk
4. Things to Keep in Mind When Shopping for Exotic Marijuana Strains
5. A List of Some Exotic Indica Strains and Sativa Strains
6. A Note on Rare Weed Strains
7. Frequently Asked Question
7.1. What type of weed is exotic?
7.2. What is the rarest type of weed?
8. Conclusion
Search a strain
Sativa

What is a Pound of Weed?

Indica vs Sativa vs Hybrid: An In-Depth Comparison

11 of the Best Strains to Grow Indoors