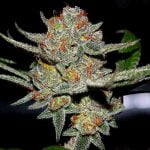 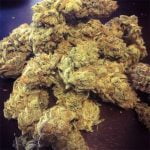 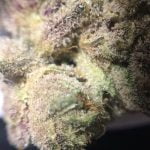 White Buffalo is a Sativa-dominant hybrid that can be described as a cross between Romulan, Blackberry, and Bay-11. It originates from a pack of 3 Sativa-dominant strains bred by the World of Seeds company in Spain. The strain was first released in 2006 as White Rhino, but it wasn’t until 2011 that she adopted her current name.

The negative effects of White Buffalo marijuana include dry mouth and low appetite. Sometimes, users report headaches as well. The strain is also known to leave some users feeling paranoid and anxious, both at a physical and mental level.

White Buffalo marijuana is very potent and can be consumed in one or two hits. The strain lasts approximately 3 to 4 hours when enjoyed in a joint or pipe. A slightly lower price compared to other strains of the same THC content is also present.

Its THC content is between 15 and 18%, making it a moderate amount. White Buffalo marijuana also comes with a strong CBD content of 9%, which makes it a good strain for relieving symptoms of chronic stress.

However, this strain is very picky when it comes to watering, so users should water their plants lightly to prevent root rot issues often prevalent in the open outdoors. Flowering time for the White Buffalo marijuana strain takes approximately 8 to 9 weeks.