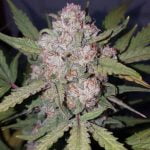 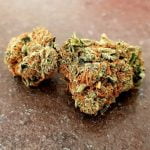 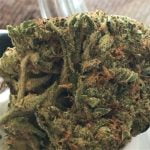 Stardawg is one marijuana hybrid cross between Chemdog 4 and Tres Dawg that will have you feeling energized, uplifted, and focused while reaping the benefits of stress relief. It originates from the Bay Area of California, where it was first created as a Sativa-dominant strain by NorCal breeder Dr. Subcool.

In the medical context, it is frequently used against migraines, stress, depression, anxiety, and fatigue and can boost the patient’s mood. Stardawg has a complex flavor that mixes earthy pine with sour notes of diesel. It may not be suitable for novices as its uplifting effects may lead to an increased feeling of euphoria.

The negative effect of the strain is that it may make the user feel a bit paranoid after smoking it. You may also feel adverse effects such as dry eyes, dry mouth, and red eyes.

Stardawg has THC content is between 16-24%. It usually takes between 2 to 4 hours for this strain to start producing its effects. Also, the intoxicating effects of Stardawg may last up to 3 hours, which is why users are advised to have a supply of snacks on them to prevent hunger pains.

Growing takes approximately 8 to 9 weeks, which is a much longer time than the other strains. As such, growers are encouraged to look up various methods of speeding up the process, as they would prefer increased numbers of their plants rather than a few with longer flowering cycles.

Stardawg flowers in 67 days indoors with moderate yields (up to 600 g/m²). It can grow as high as 3 m outdoors and reach heights between 90 and 150 cm. It’s highly recommended to plant the seeds indoors as it’s known to grow big and produce a lot of resin.

Where to Buy Regular Stardawg Seeds?

No supplier found for Stardawg seeds.

Where to Buy Feminized Stardawg Seeds?

Where to Buy Autoflowering Stardawg Seeds?