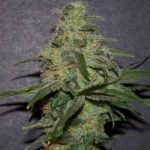 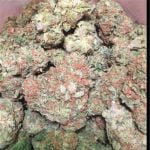 Platinum Kush is an indica strain cross between Afghani and OG Kush, this strain is named for its platinum-hued trichomes. In addition, it has a coating of crystal resin that gives it an otherworldly sheen. It originated in the Bay Area but is now cultivated in multiple locations, including Hawaii and the Netherlands.

Platinum Kush has been described as a heavy head high, which begins with a strong cerebral buzz followed by waves of relaxation and euphoria. Medical marijuana patients consider this strain useful for relieving stress, depression, mood disorders, and headaches. The indica body buzz also makes this a popular choice among patients treating muscle spasms and pain.

This strain has a sweet, earthy taste with a slight hint of sour muskiness and a soft minty aftertaste. The smell is pungent, with an earthy sweetness and hints of fruit and pine that linger on the tongue. Growing this strain is easy, and it does well both indoors and out. It is a moderately tall plant with dense, firm buds that are medium in length and dark green in color.

Platinum Kush is a good choice for beginning growers due to its mellow nature and ease of growth. Its dense structure makes it resistant to mold and pests but also protects it from light leaks. The buds are heavy with THC-laden trichomes, making them ideal for harvesting any time after nine weeks of flowering.