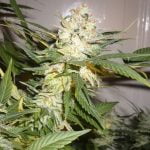 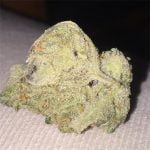 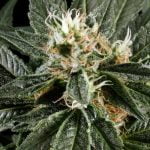 Great White Shark is a Sativa-dominant marijuana strain from parent Super Skunk #1 with crosses of the South American and South Indian Sativa. It originated from the Dutch Passion Seed Company in the Netherlands and is still grown there.

Medical marijuana users claim that it effectively treats symptoms of chronic pain, fatigue, stress, and lack of appetite. The effects are cerebral, with a “cerebral rush” said to occur shortly after smoking the strain. Great White Shark is also said to relieve anxiety and tension and increase creativity and an uplifting sense of euphoria and relaxation.

The known side effects of this strain are dry mouth, dizziness, and paranoia. The THC content of this strain has been reported to reach 15 to 30%. The aroma of this marijuana strain is described as fruity and has undertones of skunk.

Growing this strain is said to be difficult, as it requires extensive training and grows best indoors. In addition, this strain is a flowering marijuana plant with a distinctive aroma and taste, which is not suitable for “stealth” or cultivation outdoors.

The plant can be grown indoors and outdoors in the Northern Hemisphere; however, indoor growing is more common because it provides growers with greater control over the growing environment. This marijuana strain has a flowering time of 8 to 9 weeks when grown indoors, with an average yield between 400 and 500 grams per square meter.