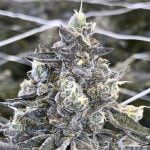 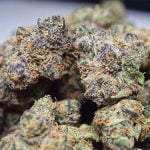 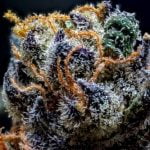 Apple Fritter is a hybrid strain; it’s as good to smoke as it is to bake with. Its sweet and earthy flavors and aroma are reminiscent of apples that have been baked into apple pies. Originating from a secret, undisclosed greenhouse in Washington state, its parent age is unknown, but it is well known to be the offspring of a Blueberry and an Unknown Indica.

It received its name from a Lumpy’s Flowers employee who was asked to name another strain they were growing in their secret greenhouse. She exclaimed, “It looks like apple fritters!” and the name stuck. Its effect includes a relaxed and euphoric high. This strain is an excellent choice for anyone seeking a sedative high.

This strain helps treat patients suffering from anxiety, depression, and fatigue. It is also great for those who want to enjoy a night in and spend some time relaxing by themselves. The adverse effect includes dry mouth, red eyes, increased appetite, and a strong stoned buzz.

Its THC content is between 18-27%, making it a strong strain. Apple Fritter is known to smell fruity, with hints of sweet vanilla overtones. Growing takes approximately 7-8 weeks in hydro. When growing Apple Fritter, you can expect to see a short plant that produces dense buds. Its branching is considered bushy, and its buds are extremely sticky from the THC crystals it produces.

It is known as a great indoor plant. Lots of light is best for the plant to produce maximum yield. When growing Apple Fritter outside, it can be grown successfully in Northern and Southern climates. After being harvested, the plant is dried and then placed in a packaging machine for immediate distribution. This strain is available in a pre-rolled form as well.