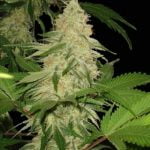 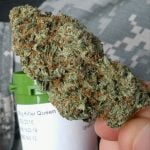 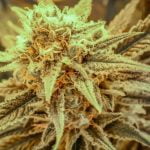 Killer Queen is a British Columbia native, the outcome of an imaginative cross between G13 and Cinderella 99. It originated in 1994 at World Famous Cannabis Castle on Vancouver Island, Canada. The tropical flavor, however, is quickly followed by an earthy herbal tone that’s reminiscent of fresh lemon leaves or pine needles kicked up by a bracing fall wind.

The effects of this strain are felt most heavily in the face, eyes, and forehead. It leaves feelings of deep relaxation, clarity of thought, and general uplift. It helps the user to think more clearly and more productively, and creatively. Medical marijuana patients commonly use the Killer Queen hybrid to treat pain, mood swings, anxiety, and seizures.

The adverse effects include dry mouth, paranoia, dizziness, and headaches. Many say it creates an ecstatic atmosphere that can be somewhat overwhelming to inexperienced users, but very few have found this strain to cause paranoia or disorientation. The THC levels in Killer Queen are moderate at around 18%, but the balance of other cannabinoids makes for a heady high.

This strain is a heavy producer, reaching up to 3 feet in height, and it flowers in 10 weeks and produces a medium-sized yield. It can grow indoors as well as outdoors because of its resistance to mold and mildew. It thrives in sunny and warm climates with a long growing season. The leaves are large, dark green, crinkly, and very bushy.