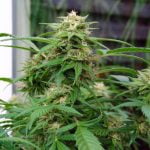 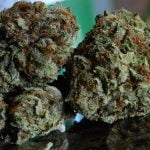 White Rhino, a hybrid marijuana strain bred from White Widow and North American Indica, is one of the most dominant strains in use today. It’s currently dominating weed culture on the West Coast and in western Canada as well. This strain originated from the GreenHouse Seed Co. and was developed under the leadership of Shantibaba. It’s said to have come from cultivars sourced from Afghanistan, Brazil, and India.

Its effect includes heavy relaxation, as well as an anti-inflammatory and pain-relieving quality. White Rhino is the kingdom’s most dominant marijuana strain. Medical marijuana patients who are trying to treat chronic pain should take note of this strain. It’s reported that it’s been used in various illnesses from multiple sclerosis, migraines, and other types of pain.

Its adverse effects include a dry mouth and eyes as well as paranoia. Those who have high blood pressure or suffer from anxiety should be cautious when taking this strain. This is a heavy-handed strain, and those who are treating pain, depression, stress, or anxiety should take note of its effects before consuming it.

The THC content of White Rhino is very high, measuring in at 17 to 21 percent. Its CBD content is relatively low at 0.5%. This strain thrives in warmer temperatures and has been known to grow into a bushy plant. It’s been bred to be tolerant of colder climates, but it does not thrive in them. This particular strain is usually grown indoors because of its size and the amount of space that it takes up.

Growing takes approximately 9 to 11 weeks and is recommended for intermediate growers. It’s known for its high yield and is often grown indoors. The plant itself has a floral smell that combines with a fruity aroma. The nugs are light green in color and look purplish when the trichomes are concentrated.