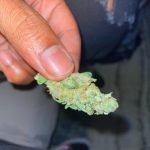 The Watermelon Gelato strain is hybrid marijuana made by crossing Watermelon Zkittlez and Gelato 45. It originated in Southern California and is now grown in many legal cannabis states. The strain produces uplifting effects which you can feel instantly.

Some users have reported feeling energetic and euphoric after using Watermelon Gelato. Others have said it helped them relax and eased their anxiety. It is a great strain for people who suffer from depression, fatigue, headaches, or chronic pain as it can help to relieve those symptoms.

The adverse effects are minimal with this strain. Some people have reported feeling dry eyes and mouth after using it, but these effects are typically short-lived. A small percentage of users have also said they experienced headache, paranoia, and anxiety after using Watermelon Gelato, but this is not a common side effect.

The THC content ranges between 17-25%. Growing can take anywhere between 8-9 weeks and the average yield. The buds are dense, medium-sized, and have hues of lime green and dark purple. It’s highly recommended to plant it indoors.