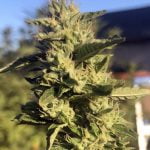 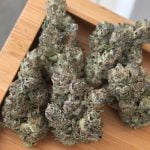 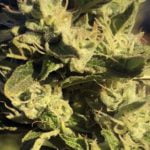 Sweeties strain is a hybrid between the The White, GSC, and Tahoe OG marijuana, the motherline of which is The White, a popular and award-winning strain that’s been in the game since 2005. The final cross was done with Face Off Bx1, an old lineage that draws on a mix of landrace strains worldwide.

The cannabis was selected for its strong aroma profile and phenotypes focus on cool shades of green with purple and magenta hues. It originates from an area just south of Colorado Springs, between the Ute Pass and Carson Pass, which is a rare breed of landrace marijuana.

Sweeties provide meditational and uplifting effects without a heavy, couch-lock effect. Medical marijuana patients with stress, anxiety, or depression disorders, as well as mood imbalances, can benefit from the effect of this hybrid.

The adverse effects may include anxiety, dizziness, and paranoia while using cannabis. Other physical effects include dry mouth and red eyes. THC content is between 15-22%, which is considered a high level for marijuana, with other strains typically around 10 percent or less.

It’s a relatively short-growing marijuana strain, with a flowering period of 8 to 10 weeks, harvesting in late September through October. Seedlings need to be grown in a mixture of soil and coco coir instead of flower-specific growing mediums.

Where to Buy Regular Sweeties Seeds?

No supplier found for Sweeties seeds.

Where to Buy Feminized Sweeties Seeds?

Where to Buy Autoflowering Sweeties Seeds?