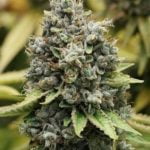 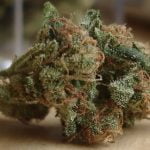 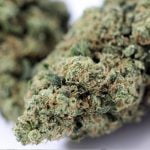 Sour Diesel marijuana plants are known for their distinct smell and quick-acting, cerebral effects that come on within minutes. This Sativa strain features a pungent flavor profile that smells like diesel, with sweet undertones. Known for producing long-lasting mental euphoria and creativity, Sour Diesel was originally created by crossing Chemdawg with Super Skunk during the early ’90s in California.

Sour Diesel is great for daytime use and provides a surge of energy without making users feel jittery or anxious. Its effect can be felt in as little as 15 minutes, leaving leftover effects that are fully absorbed by the following day. This strain has a reputation for curing fatigue and depression and is widely recommended by medical marijuana patients.

Its negative effects include paranoia, dry eyes, dry mouth, and feelings of anxiety. The THC level of this strain ranges from 15-20%. Sour Diesel offers some of the best pain and stress relief for medical marijuana patients. Patients who suffer from nausea, depression, fatigue, loss of appetite, and chronic pain are often prescribed Sour Diesel to alleviate these symptoms.

When growing Sour Diesel, growers use regular soil to raise their plants as high as possible. Sour Diesel has a short flowering time of about 77 days, making it more suitable for indoor growing environments (such as greenhouses and grow tents), with an approximately growing period of 10 to 15 weeks. It takes about two and a half weeks for its buds to mature.

It is also beneficial to give the plants plenty of nutrients such as nitrogen, phosphorus, potassium, and micronutrients. Use fertilizer and compost regularly to keep your Sour Diesel from suffering from nutrient deficiencies.