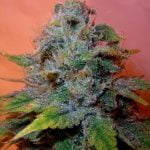 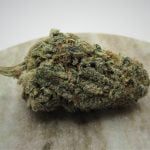 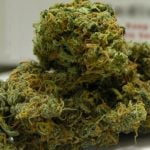 The Romulan strain of marijuana is varied, with both Indica and Sativa genetics. Made by crossing North American Indica and White Rhino, it’s been named after the fictional Star Trek race. Pine-scented, Romulan is revered for its potent and therapeutic qualities. You can expect this strain to deliver intense cerebral effects that eventually give way to sedation and relaxation.

It originates from the Great White North, where it was developed for medical use. First introduced in Canada at the end of the 80s, Romulan was soon banned because it was deemed too powerful. But some growers managed to report their strains’ qualities to the authorities, and since then, only a handful of those have seen legal action. Its effects include pain reduction, stress relief, relaxation, and drowsiness.

The adverse effects of Romulan include dry mouth, increased appetite, dizziness, and paranoia. While rare, some people report that it brings on anxiety. The THC content in Romulan ranges from 16% to 20%.

Romulan is a dense bud-yielding strain, meaning it produces high amounts of trichomes and resin. Growers say they enjoy working with this plant because of its ease of growth and enormous yields.

It bears both an Indica and a Sativa strain. Because of its hybrid nature, it can be cultivated in either indoor or outdoor environments. However, first-time growers should grow indoors, as the flowering period is somewhat long: between 10 and 11 weeks for indoor plants and 8 to 10 weeks for outdoor plants.

Where to Buy Regular Romulan Seeds?

No supplier found for Romulan seeds.

Where to Buy Feminized Romulan Seeds?

Where to Buy Autoflowering Romulan Seeds?