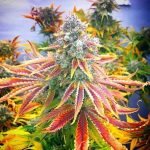 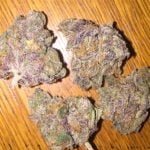 Known to some as “Rainbow Kush,” “Rainbow Buds,” or simply “Rainbow,” this hybrid is an even balance of the Dancehall and Blueberry strains. Rainbow is so-named because of its many colors during flowering, which start green and turn pink, purple, gold, and finally orange. The strain’s aroma has been described as spicy-sweet fruity with a hint of diesel.

It originates in Jamaica. An American first brought rainbow from the island who cultivated marijuana in his Garden of Eden. Its effects are described as both creative and calming, although it should be noted that some users report feeling very high.

The medical benefits of this strain include the ability to relieve pain and anxiety. While its adverse effects may include headaches, dizziness, and paranoia, it is still considered an ideal daytime strain.

THC content range between 17-20%. Growing this strain indoors is not recommended, as it’s favored by users in Northern California, where the weather is typically too cool for an indoor grow. The flowering time is between 8 and 10 weeks. Therefore, you can expect harvest time to be around September.

Where to Buy Regular Rainbow Seeds?

No supplier found for Rainbow seeds.

Where to Buy Feminized Rainbow Seeds?

Where to Buy Autoflowering Rainbow Seeds?