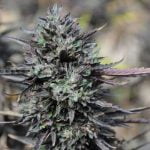 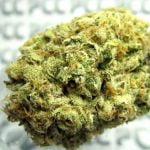 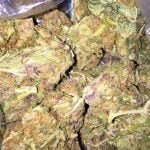 Purple Trainwreck is a hybrid strain created by mixing Mendocino Purps with Trainwreck — and as the name suggests, it’s fairly popular among marijuana users and growers alike. It originated in Northern California, and its THC levels typically range between 15 to 20 per cent.

This strain is known for producing a stimulating high that’s centred in physical relaxation, but it remains surprisingly euphoric even as it fades out. Medical marijuana patients use this strain to help relieve symptoms associated with pain, stress, anxiety, and insomnia.

The adverse effects of Purple Trainwreck include cottonmouth, dry eyes, headaches and dizziness, although these symptoms aren’t typical of this strain. In addition, the taste is a little more sugary than it is skunky (the sweet flavors come from the Purps parent), with a slightly piney aftertaste.

This strain is a good choice for indoor and outdoor growing purposes, as both methods produce high-quality bud with the right amount of THC. Some growers claim it works best in soil setups because they prevent humidity issues, common with hydroponic setups. It smells of bright citrus, pine, and lavender. It can grow anywhere between six and 12 inches tall, but it’s most effective in a sea of green setup.