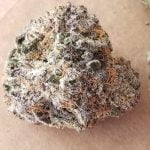 The Purple Gorilla strain is a hybrid with its lineage unknown, but it’s believed to have descended from popular strains in the Bay Area of California. This hybrid strain was made by crossing the OG Kush, Purple Urkle, and Sour Kush strains. Its aroma combines sweet grape, cherry, and citrus scents with an earthy undertone.

The cerebral effects of his strain are powerful and long-lasting. The high from this strain is described as extremely strong, uplifting euphoria, and deeply relaxing. It’s perfect for treating conditions such as chronic pain, insomnia, migraine, and muscle spasms.

The adverse effects of this strain are described as physical, such as sedation and dry eyes. They also include dizziness and dehydration. The THC level is high at 18%. This strain is straightforward to grow and requires little maintenance once it’s established in your garden.

The strain has a short flowering period of around 7 to 8 weeks, where it typically yields up to 1 ounce per plant indoors or in small containers outdoors under ideal conditions. The buds are very dense and are covered in crystals that change colors as they mature. The strain also has a pungent, Skunk-like aroma that is sometimes described as “rotten” or “skunky.” The high from this strain is extremely strong and usually lasts around 3 to 4 hours.