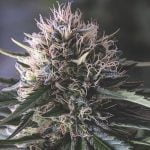 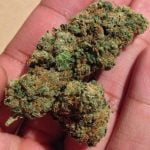 Presidential OG, also known as “Presidential Kush” and “Royal Queen Seeds,” is an Indica-dominant hybrid marijuana strain made from a cross of Bubble Gum and OG Kush that will definitely get your attention with its intense citrus and pine smell. This strain originated in California, where it was first released in 2009 by Royal Queen Seeds.

The effects of this strain are described as an overwhelming euphoria and happiness that hits fast and hard. It tends to give its user a general sense of well-being that is very calming. Users oft describe it as a full-body relaxation that makes them sink into their chairs. Medical marijuana patients commonly use Presidential OG to treat anxiety, insomnia, and pain.

The adverse effects of this strain include dizziness, dry eyes, and paranoia that will slowly creep up on you if you consume too much. Some described the taste as more pine-like, and I found it had a powerful grapefruit flavor that made my mouth water for more. The high level of THC produced by this strain (18%) makes it popular among patients and recreational users alike.

Presidential OG has a flowering time of 8-10 weeks when grown indoors. Outdoors it will flower in early October. Light orange hairs with lime green leaves and a thick coating of trichomes make this flower stand out in the crowd. The buds themselves have a nearly pure white coat of crystals that glisten under the light.