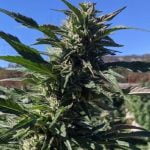 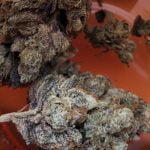 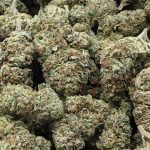 Pink Panties is an Indica-dominant strain made by crossing Burmese Kush and a Florida Kush. It originated in the UK by South American Seed Co. In 2011, it was tested and released in the United States by Peaceful Valley Farmacy, based in Canada. This strain is noted for a sweet, tangy citrus smell that builds to a strong floral bouquet.

This cannabis strain offers a potent sedation effect, which may help medical marijuana users with symptoms like anxiety, depression, and PTSD. It can also help with insomnia, as well as chronic pain and inflammation.

The effects of Pink Panties include extreme relaxation and a pleasant feeling of euphoria. This can lead to giggling and laughter, making this strain good for entertainment. It can also leave users feeling focused and boosts creativity.

There are also some mild side effects of dry mouth and dry eyes, and it may cause minor headaches. The THC levels in this strain are high at 16% compared to the average 8% THC level of most popular strains. This plant is only 2-3 feet tall, with a short flowering period of around 8 weeks.

This strain is easy to grow since it is a hybrid strain that doesn’t require extensive fertilization. It can grow well both indoors and outdoors and is a moderate yielder. It also retains resin, producing several dense, medium-sized buds that are covered in trichomes. These buds have a strong citrus smell and taste.