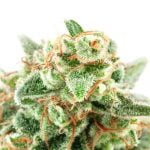 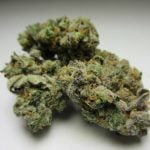 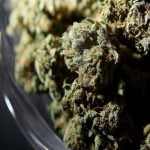 Now and Later is a cross between Zkittlez and Abula. It originated in California and has been a popular strain on the West Coast since. Now and Later gets its namesake from the famous candy and is sometimes known as Now N Later.

This strain has a sweet, full flavor profile with aromas that are surprisingly earthy and spicy. Users also report feeling more creative and focused than usual and have been known to have a tingly effect and increased energy, especially in the afternoon. Medical marijuana patients who seek to alleviate chronic pain due to glaucoma, migraines, and other conditions like lack of appetite and fatigue also appreciate this strain’s sedative and anti-anxiety effects.

The adverse effects of Now and Later are common to many other strains, including paranoia, dizziness, tiredness, and dry mouth or eyes. The THC level of this strain varies from about 18 to 21%, and it has a dirty-amber color with reddish hues.

Now and Later is a hardy, sturdy Indica-dominant strain for both indoor and outdoor growing. This plant is very resistant to mold as well as mildew. It takes between 60 to 80 days for the plant to mature, though growers have achieved much earlier harvests with careful care and proper growing conditions. The plant’s appearance is slightly bushy, with light green buds that become darker towards purple leaves when they get closer to harvest.

Where to Buy Regular Now and Later Seeds?

No supplier found for Now and Later seeds.

Where to Buy Feminized Now and Later Seeds?

No supplier found for Now and Later feminized seeds.

Where to Buy Autoflowering Now and Later Seeds?

No supplier found for Now and Later autoflowering seeds.