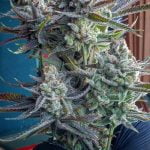 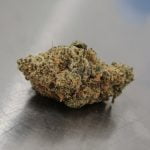 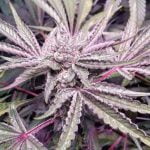 Nitro Cookies hybrid strain is a cross of Gas Mask and Animal Cookies, so it’s not surprising that its effects are somewhere in between those two distinct marijuana strains. It originated in the United States, making its way to Europe in the 1990s. The strain is known for having a gassy and earthy flavor as well as a sweet aroma.

This hybrid marijuana strain is known to provide uplifting, euphoric, and relaxing effects. This hybrid strain is best for nighttime use because it tends to make users sleepy. Medical marijuana patients choose this strain to relieve symptoms associated with chronic pain, fatigue, anxiety, and depression. The strain has an average flowering time of 8 weeks, and its nugs are frosty and dense, dark green and purple.

The known side effects of Nitro Cookies include dry mouth and eyes, hunger, and a feeling of nausea. The THC levels of this strain range from 18 percent to 20 percent. Users who follow the recommended dosage guidelines will be less likely to experience negative side effects than those who overindulge.

The flowering time of Nitro Cookies is approximately eight weeks. It has a low yield, but the dense, dark green and purple nuggets produce strong gassy and earthy flavors with just a hint of sweetness. This strain can thrive indoors and outdoors with a maximum height of 55 inches.