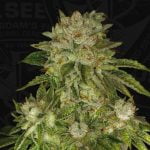 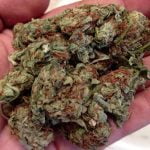 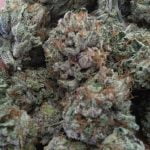 MK Ultra is an indica strain that’s potent and fast-acting with a strong euphoric effect. It’s a cross of OG Kush and G13, giving it an earthy kush flavor with a pine finish. MK Ultra was bred by T.H. Seeds and won 1st place Indica at the High Times Cannabis Cup in 2003 and 2nd place in 2004.

Its effects are almost instant, and it’s great for pain and anxiety. The effects are best described as a full-body rush, while the head buzz is a kaleidoscope of colors. MK Ultra is potent enough to induce sleep, so it may not be a good choice of strain to use if insomnia is a problem.

Its THC content is between 17-21%, and its CBD content is between .1-1%. The Indica genetics make a perfect match for growers who love a relaxing, couch-locky vibe that relieves pain and discomfort; it is also great for depression symptoms.

MK Ultra can be cultivated both indoors and outdoors. It has a flowering time of approximately 56 days, so plan accordingly if you live in an area with a shorter growing season. The yield is above average for an indica strain, usually around 400 grams per square meter.