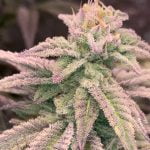 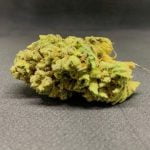 Miracle Whip is a hybrid strain with a hearty indica dominant strain and mild Sativa influence. Created by the haphazard crossing of Starfighter, Columbian, and Cookies and Cream, this strain has an Indica dominant: Sativa dominance ratio of 60% to 40%. It originates in the Netherlands, where it has been grown for more than 20 years.

This strain is effective for relaxation, pain relief, mild anxiety, and sleep aid. It is also used for stress and depression due to its magnificent balance of effects. Miracle Whip is commonly used by patients who are undergoing chemotherapy or other long-term treatments due to the fact that it does not have any adverse side effects on respiratory health.

While its adverse effects include dry mouth, dry eyes, and headache which can be alleviated either by consuming plenty of water, drinking something with electrolytes, or through the use of topical solutions.

This strain is suitable for daytime use and is a great option for consumers who are suffering from depression, lack of appetite, lack of energy, and pain issues. Its THC content range has been measured anywhere between 16-21%.

This strain has a distinct, pungent, and earthy smell that can easily be detected in a closed environment. The taste of Miracle Whip is sour to many. With a history of its own as an indoor strain, Miracle Whip has been cultivated indoors under the same conditions with which it was created.

This equates to low temperatures and high humidity, which is what makes the strain so appealing and popular in dry climates. Flowering time for Miracle Whip has been measured between 9-11 weeks yielding between 350-400 grams per square meter.