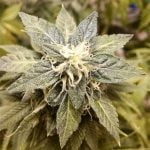 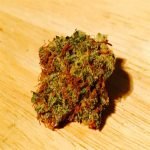 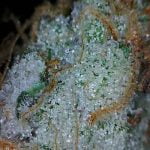 Lucky Charms is a potent hybrid marijuana strain made by crossing The White with Appalachia. This strain was introduced to Colorado in 2014, and it originated in California, where it usually is a cross of two Indicas. It has potent effects that may encourage creativity and feelings of happiness.

The effects of this strain are euphoric and may encourage creativity alongside feelings of happiness. The high THC content also means that it is a popular strain for medical marijuana users suffering from various ailments, such as stress, anxiety, depression, nausea, and more.

The adverse effects of this strain include dry mouth, dizziness, paranoia, and headaches. It can be used during the daytime because it will not cause drowsiness or fatigue. Lucky Charms has a THC content of 23%, one of the highest in the marijuana market. This means it has the capability to produce extremely potent effects.

Lucky Charms looks like marijuana with small, purple-blue colored flowers. The buds grow in clusters of three to eight flowers. This strain is perfect for inexperienced growers who are just starting. Growers say this strain is coated in sugary resin and tastes bright and tangy like fruit. This strain is best grown indoors with a flowering time on average of 9 weeks.

This strain can grow both indoors and outdoors. It is not a picky strain, and it does well in soil, coco coir, hydro, and a combination of all three mediums. Growers say they often harvest their plants after 10 weeks for smaller yields. When growing outdoors, this strain does best in temperate climates that are not too hot or too cold.