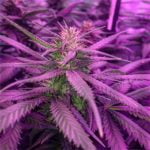 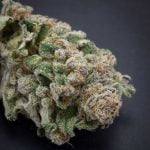 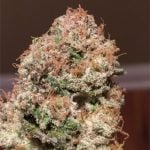 Locomotion is an Indica-dominant strain made by crossing Blue Diesel and Timewreck, with a dreamy cerebral high. This strain originated in California and was released in 2016. Locomotion’s sour-smelling buds bloom with deep hues of silvery purple. Novices take caution, and this strain is potent.

Locomotion will leave you feeling focused yet relaxed, with little to no side effects. The indica high comes on strong and euphoric, easing you into the couch with a sedative feeling. Medical marijuana patients will find this strain beneficial in treating physical symptoms like muscle spasms, chronic pain, stress, and insomnia.

The adverse effects of Locomotion include dry mouth and eyes, dizziness, paranoia, anxiety, or even paranoia. The THC content in this strain is 18% on average, with some strains having 22%. It has been described as being great for nighttime use and described with a mix of both sweet and earthy aromas.

Locomotion will be ready within 6 to 8 weeks for harvesting when grown indoors and can reach heights of 2 to 4 feet tall outdoors. The flavor of the smoke varies from toasted pine to lemon zest, depending on your preference and tolerance level. The flavor is described as being a light pine with notes of sweet fruit and soft earth.

Where to Buy Regular Locomotion Seeds?

No supplier found for Locomotion seeds.

Where to Buy Feminized Locomotion Seeds?

Where to Buy Autoflowering Locomotion Seeds?