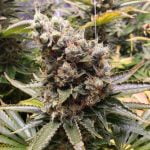 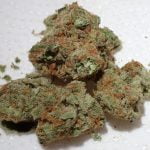 It developed an early following among medical cannabis users in the United States who used the strain to treat depression, anxiety, and fatigue. It can be used to treat nausea and vomiting from chemotherapy.

The cerebral effects of this strain are reported to be creative, motivating, and long-lasting. The smell is quite fruity with hints of spice. The common side effects include cottonmouth, dry eyes, and dizziness. THC content is around 16% to 20%.

The buds have a great weight and are very dense. As the plant matures, the leaves will turn purple, but this doesn’t mean that they are being affected by any disease or pest infestation – it is simply the way that this strain expresses itself when ready for harvest.

Growing this strain is very easy as it requires little maintenance to grow and yields good crops. It can be grown indoors or outdoors in temperate climates with ease. The flowering time takes around nine weeks, with the harvest in September at the earliest and November at the latest. Ideally, this strain is grown using soil, but hydroponics will also work well for experienced growers.