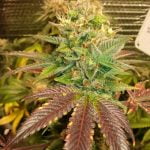 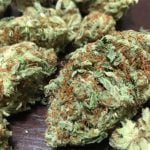 Larry OG is one of the most sought-after strains in California, but it can also be found throughout the United States. Larry OG is made up of a potent Indica strain that you’ll love for its potency and ability to get things done while feeling relaxed.

This hybrid is an Indica-dominant cross between two heavy hitters: SFV OG and OG Kush. As one might expect with this lineage, it has a distinct pine and lemon fragrance rather than the smell of fresh flowers. It originates from Larry OG, who is a San Francisco OG grower.

The effects of Larry OG are somewhere between the physical and mental. Its effects are mostly head-centric, although it does have a body buzz that is mild and enjoyable. You will feel euphoric and relaxed, which makes this strain great for getting things done.

Medical marijuana patients have used Larry OG to reduce pain, nausea, and anxiety. It is also a favorite among cannabis clubs. The adverse effects of Larry OG can include dry mouth, head and body pain, dizziness, and insomnia. It can also cause joint stiffness.

Its THC content is between 18 and 25 percent. While this is high by most standards, it is still considered medicinal. However, some consumers say that it feels quite overpowering, and the high lasts longer than they would like.

Larry OG can be grown indoors or outdoors and is very easy to grow in either situation. It also does well indoors in a hydroponic setup. Budding marijuana growers love Larry OG because it’s effortless to grow. This plant takes eight to nine weeks from seed to harvest and offers around a 50 percent return on investment when grown at home.