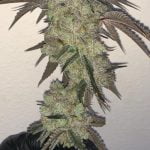 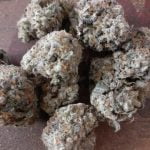 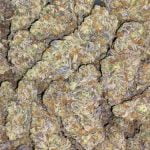 LA Wedding Pop is a Sativa-dominant hybrid created by crossing a White LA Confidential and a Wedding Cake. LA Wedding Pop is typically described as having notes of berries, both sweet and tart, and fruit loops cereal in terms of flavor and aroma. It originated in South East California in 1992. It then spread throughout the Santa Cruz Mountains and into San Francisco before spreading throughout the state of California.

The effects of LA Wedding Pop are described by the consumer as being sweet, cerebral, and euphoric. It also produces an uplifting feeling that can last for hours. The relaxing feelings from LA Wedding Pop can help with anxiety, PTSD, and depression, and it’s also good for creativity.

The adverse effects of LA Wedding Pop include increased anxiety, paranoia, and dry mouth. It also causes fatigue and eye irritation. The THC levels in LA Wedding Pop are reported to be between 18% to 25%. Some people have described the smell of LA Wedding Pop as a combination of berries, fruit loops, cereal, and wine.

Growing this strain indoors can be difficult because the LA Wedding Pop plants are very tall. It can be grown outdoors, but the grower must adjust their watering schedule to ensure that the buds don’t dry out. Flowering usually takes 60 days or more.