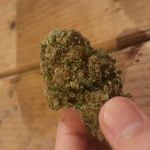 Kong is a new Indica-dominant strain that was created in Colorado by Holy Smoke Seeds. It has humble origins and has now become one of the most popular strains available. This strain was made by crossing Motavation with a backcrossed White Russian strain.

Medical marijuana patients who need strong sedative effects with deep relaxation will find this strain to be appreciated. This strain is also recommended for patients trying to combat sleep disorders, depression, nausea, and pain. The effects of this strain are very potent and are often described as being tingly and calming.

The aftermath effects of this strain include dry mouth or red eyes and anxiety. It is known to be quite potent, with THC levels reaching anywhere from 16% to 22%. Kong will produce flowers in either a skunky or berry smell depending on the grower’s practices.

Kong has a flowering time of around 8 to 9 weeks. This strain has a powerful smell of pine and citrus that spreads throughout the room. The taste is described as being very powerful and sweet with a hint of spice. It can be grown indoors or outdoors with either a hydro or soil setup.

This hybrid takes after its namesake in both strength and appearance. Its hairy buds have thick trichomes throughout, and they secrete massive amounts of THC-rich resin. The trichomes also have a heavy coat of orange or red resin that makes the bud appear almost like tar.

Where to Buy Regular Kong Seeds?

No supplier found for Kong seeds.

Where to Buy Feminized Kong Seeds?

Where to Buy Autoflowering Kong Seeds?