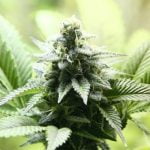 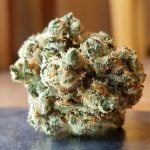 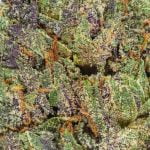 Jack Frost is a 60 percent Indica/40 percent Sativa hybrid strain with parent strains White Widow with Northern Lights #5 and Jack Herer. Jack Frost’s flavor profile includes sweet scents with just a hint of lemon on the inhale and heavy woody scents on the exhale. It emerged in the Netherlands and has been described as being a potent medicinal strain.

Jack Frost is recommended for medical marijuana patients suffering from PTSD, anxiety, or depression. It’s got a sweet yet woody flavor reminiscent of lemon, and it’s a popular choice for treating symptoms related to chronic stress and other mood disorders.

Patients choose this strain because it can help reduce symptoms without causing side effects like those accompanying more traditional medications such as antidepressants or anxiolytics.

This strain is said to produce a strong effect on happiness, creativity, and energy. The strain is good for mood elevation and creativity while still promoting a sense of relaxation. Adverse effects include red or bloodshot eyes and dry mouth that often come with paranoia.

The THC level of Jack Frost packs a punch. The strain is known to contain 16.46%-17% THC at the end of the flowering period. Flowers take 11 to 14 days to fully mature, with its Indica heritage giving it heavy, thick buds.

Growing usually takes two to three weeks from seedling to harvest, depending on the environment and the strain. The plant grows short and maintains a compact shape during its growth cycle due to both its Sativa and Sativa-dominant genetics. It has medium-sized leaves which are densely packed, making for a heavy yield of buds.

It can be grown indoors or out, but it’s best to grow it in the same environment to stretch and mature. Jack Frost mainly produces medium-sized buds that are heavy and sturdy, with dark amber-colored nugs.

The plant has a pungent aroma that can fill a room and is best for indoor growing due to its dense structure. In addition, this strain is resisting mold and mildew in humid climates and temperature and humidity fluctuations.