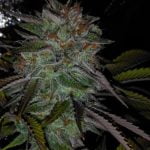 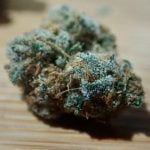 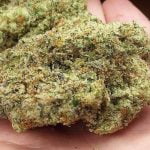 Compound Genetics has recently released Ice Cream Man, an Indica-dominant cross of Jet Fuel Gelato and Legend Orange Apricot. This strain was made popular in Colorado before making its way out west but is now available in Oregon and California. The aroma is fruity with hints of fuel, also reminiscent to some degree of apricots or berries.

The effects of this strain are quick-hitting, giving a dominance of relaxation. It provides a clear-headed cerebral state, leaving one feeling relaxed and capable of conversation while still performing reliable functions. Medical marijuana patients have praised its ability to bring relief to pain, stress and sleep, among other things.

The common side effects include pain, stress, and sleepiness. Insomnia is a common effect of this strain, but it is also helpful for pain due to its sedating effects. THC levels are typically around 21% and rarely higher than 28%, making it an effective choice for medical marijuana patients who take cannabis as part of their treatment.

The flowering time is around 9 weeks, and the yield is relatively low for an Indica dominant strain, but that makes this more desirable for indoor growers because it takes away from the main crop rather than being in addition to it. The plant itself grows medium height with buds that are dense and sticky with trichomes.

This strain produces a medium yield, with dense buds that are covered in orange/white hair and have a splash of icy white trichomes. It can thrive in various growing environments and can also be cultivated indoors or outdoors with relative ease. Ice Cream Man has been well received by cannabis consumers and medical marijuana patients.