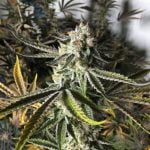 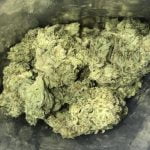 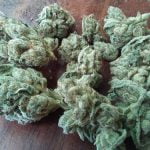 Gorilla Cake, the stoned ape of the cannabis world, is a cross between two well-known strains: Original Glue (CG4) and Wedding Cake. And while it may seem like a hard name to remember, those who smoke it claim Gorilla Cake is an easy strain to recall. Gorilla Cake gets its potency from both genetics.

This strain originated in San Francisco’s Haight-Ashbury district. Now, it’s a staple in the North Bay and enjoys popularity in California, Colorado, Oregon and Washington. Medical marijuana users love Gorilla Cake for its sedative high and its heavy potency, which helps relieve pain and insomnia, anxiety, depression and nausea.

The strain produces a cerebral head high that moves to a full-body effect. The effects are cannabis-derived and offer a combination of pleasurable and relaxing effects for users and also uplifted spirit and euphoria.

The adverse effects of this strain are dry mouth and eyes, dizziness and paranoia in higher doses. However, as is the case with most strains, smaller doses are more likely to induce dry mouth than paranoia. Gorilla Cake and its THC level, ranging from 16-20% on average, is considered a strong strain. The buzz lasts for 2-3 hours after smoking and offers a full-body sensation that can be sedating.

Gorilla Cake can grow to be medium-sized if grown indoors and outdoors, and growers can expect to harvest the plant in September. With a flowering time of about 61-days indoors and 75-days outdoors, Gorilla Cake is an easy strain to grow for novices. It’s one of the most popular strains for indoor growing or greenhouse cultivation in the United States.