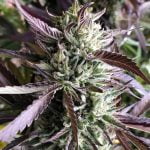 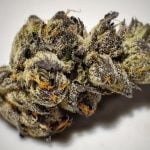 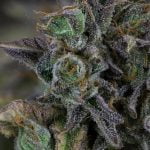 Gelato is a hybrid marijuana strain created by combining Sunset Sherbet and Thin Mint Girl Scout Cookies. Gelato’s name originates from its fruity dessert-like aroma, which is identical to that of the ice cream “gelato” popular in Europe. Gelato, aka Larry Bird, originates from California, USA but is now grown in northern parts of the United States and Italy.

Gelato marijuana can produce a large yield, so commercial growers take note: it seems that the straight Thin Mint genetics dominate the hybrid, though both strains are Sativa dominant. Its physical effects include intense relaxation, a euphoric high accompanied by strong feelings of relaxation that many people find productive and creative.

THC content ranges from 15-22%, while CBD is .08-1%. The negative effect of Gelato marijuana can include paranoia, dry mouth, and dryness of the eyes. It is medically used to treat sleep disorders, chronic pain, obsessive-compulsive disorder, and generalized anxiety disorder. Gelato marijuana cannot be smoked in the presence of children or pets.

Growing Gelato marijuana requires a short vegetative growth phase and a 2-3 week flowering period. During the first 1 – 2 weeks of flowering, you will see many thin buds that will grow into fat colas with intense orange pistils and a strong smell of mint. The flowers will finish their maturation cycle during the last 3 – 4 weeks of flowering, at which point heavy fan leaves will appear with small resin-filled trichomes.

Gelato marijuana can be grown indoors or outdoors and is a vigorous grower (like her Thin Mint parent) with a 9-11 weeks flowering time. Not recommended for novice growers.

Where to Buy Regular Gelato Seeds?

Where to Buy Feminized Gelato Seeds?

Where to Buy Autoflowering Gelato Seeds?