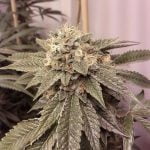 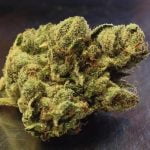 The Fire OG strain is a highly potent Indica-dominant hybrid made by crossing two different popular Kush varieties: SFV OG Kush and OG Kush. This cross has created a strong dominant Indica that is excellent for those who have high tolerances. It originates from Southern California, a popular strain within the state’s medical marijuana community.

The effects of this strain are heavy and long-lasting. The high is described as clear-headed and euphoric, with an initial burst of happiness that turns into relaxation. For those with high tolerances, the effects are strong, powerful, and long-lasting. Medical marijuana patients use the Fire OG strain to relieve pain and spasms, to fight nausea and insomnia, as well as to combat anxiety and depression.

The negative effect of the strain is weakness, dizziness, and physical and mental fatigue. This strain is not recommended for newcomers to marijuana and should be avoided by new consumers, especially those who have other issues that may be exacerbated. Its THC content varies between 18% and 22%.

The usual growing period for this strain ranges between 9 to 10 weeks. Those who have grown this strain were impressed by its potency. It was a challenge growing it outside in colder climates, but those who grew it indoors had excellent results. The buds are frosty red and emit a sweet but sour smell reminiscent of lemon pledge.