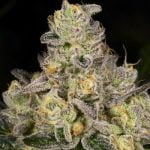 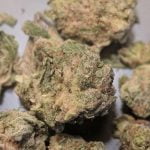 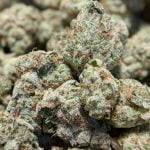 Duct Tape is a strain that was made with two parents of the same lineage. The combination of these two parent plants, Original Glue (GG#4) and Do-Si-Dos, has resulted in an Indica dominant hybrid strain with an appearance characterized by dense frosting atop a slender and moderate amount of orange hairs. This potent phenotype tests around 24% of total THC content on average, providing powerful therapeutic benefits for those who need it most.

Its effects range from body relaxation to the feeling of being zoned out with great euphoria and an uplifting mood. When taken orally, this strain effectively targets the body as a whole, working to address all issues, making it a powerful strain for chronic pain management and sleep disorders. It also doubles as a great stress reliever for those who have insomnia.

When used topically, Duct Tape’s effects are more subtle but still present in many patients who suffer from dermatological conditions such as eczema and psoriasis. Its adverse effects include dry mouth and eyes, as well as paranoia, dizziness, and anxiety.

The origins of Duct Tape can be traced back to the mid-1990s when its parent plants were bred in Holland to produce seeds. Its genetic lineage can be linked back to some of the industry’s most talented people, such as Barney’s Farm, Big Buddha Seeds, Brothers Grimm Genetics, and Mr. Nice Seeds. The seeds are now available online for medical and recreational use in both Canada and the United States.

Its THC content is between 19-25 percent, and its CBD is low, making it more of an Indica dominant hybrid than a balanced plant. Its flavor profile is earthy with hints of sweetness, while its aroma emanates diesel and incense.

Growing takes between 65-75 days. The yield is around 400-600 grams per square meter, and it is recommended for indoor growing. It can also be grown outdoors under the right conditions, but this will require a good amount of preparatory work to ensure that you’ll be able to keep up with harvesting.