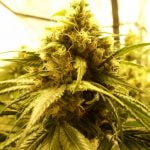 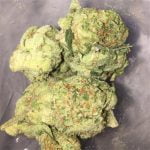 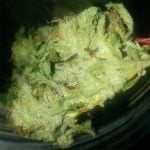 The signature smell of Big Buddha Cheese is sure to get anyone familiarized with this strain’s lineage. It’s fruitier and more potent than other strains due to its lineage coming from NYC Diesel and Big Buddha Cheese strains. The result is an Indica-dominant hybrid that combines the best from both strains. It originated in Colorado before being brought to Oregon by a grower in 1998.

The effects of this strain can be felt immediately, with a strong psychoactive effect. This is followed by pleasurable physical sensations, relaxation, and euphoria. Medical marijuana patients tend to use Chiesel for chronic pain, stress, anxiety, and depression.

Chiesel should be consumed in moderation as it usually causes undesirable side effects such as dry eyes, paranoia, stress, and headaches. However, these symptoms are challenging to deal with when the high is that potent. THC levels range from 17% to 21%.

The flower of this strain looks similar to the Big Buddha Cheese strain, but its smell is more potent. The buds will look light green in color, and they are covered with little white trichomes. They have a strong aroma that is comparable to spicy fruit.

Growing this strain is easier than most others because it’s a shorter plant. It grows better in a Sea of Green setup, but it can also be grown indoors. Since Chiesel has a flowering time of only 7 to 8 weeks, growers can expect an increase in their crops during the last part of their flowering period.

Where to Buy Regular Chiesel Seeds?

No supplier found for Chiesel seeds.

Where to Buy Feminized Chiesel Seeds?

Where to Buy Autoflowering Chiesel Seeds?