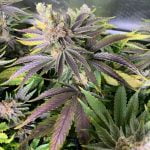 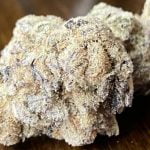 Cherry Garcia is a Sativa dominant hybrid concentrate that Sensi Seed Bank in Amsterdam developed, but it was only commercially released in 2010. This strain has parents that are 3X Crazy and Animal Cookies. It has an aroma of the coffee, earth, lavender, black cherry, strawberry, and vanilla ice cream.

The effects of Cherry Garcia are said to be happy, energetic, relaxed, and social. Medical marijuana patients will most likely use strains like this for depression, fatigue, insomnia, and stress.

Negative effects include cottonmouth, dry eyes or mouth, and anxiety. It can also induce some slight paranoia when taken too much. Normal reports that this strain has an average THC content of up to 20%. This strain produces a lot of trichomes on the buds and flowers.

Cherry Garcia can be grown outdoors in a sea of cannabis plants, but it’s not recommended because it is susceptible to pests and diseases. Also, growers won’t have enough control over their crops. Flowering takes around eight weeks, and the buds are very sticky, with a density that is hard to beat.