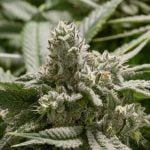 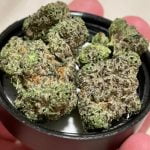 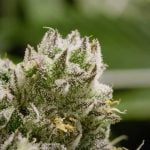 Bubba Fett is a hybrid marijuana strain made by crossing Stardawg and Pre-98 Bubba Kush. This strain has an aroma that is pungent, skunky, and dank with a hint of sweetness. It was made popular by a breeder in California called Bubba Kush and is mostly grown in the state.

Medical marijuana patients choose this strain to help relieve symptoms related to loss of appetite, anxiety, chronic pain, and stress. Bubba Fett’s effects include a relaxing and sedating effect, so save it for evening use. It leaves feelings of relaxation and euphoria.

The known side effects of Bubba Fett are extremely mild and include dry mouth, red eyes, and a light body buzz in the early stages of the high. However, the THC levels are on the lower end, averaging between 11-17%, so patients with low tolerances can still experience this strain’s euphoric and relaxing effects.

Bubba Fett can be grown outdoors in normal climates in zones 7-10 with low humidity. It takes 12 weeks to mature but uses up lots of energy, making it not a good strain to grow indoors. The plant is usually good at flowering evenly with bright orange buds through the Black Mist phenotype.

The bud of this strain is covered with black trichomes and densely filled with crystals. The aroma is said to be pungent and skunky, with a hint of sweetness. It can give off heavy smoke that smells like diesel fuel.