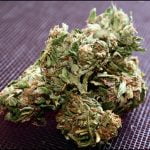 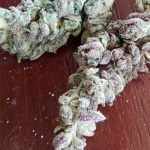 Meet Blue Widow, one of the most powerful and versatile strains of cannabis in the world. It’s a cross between two of the most popular weed varieties — Blueberry and White Widow. It originated in the 1990s in the Netherlands. Blue Widow has been around for decades, but it’s just started to become more popular in North America.

Its popularity is rising because this strain offers a great balance of both uplifting, relaxing, and calming properties. It’s an indica-dominant hybrid that provides consumers with both cerebral and physical effects. Medical marijuana patients who use Blue Widow for pain relief have famously claimed the strain has helped ease their symptoms. It also helps with other symptoms such as nausea, depression, anxiety, and sleep disorders.

The known side effects of this strain include dry mouth and eyes, paranoia, and anxiety. It has THC levels of up to 15%, and its CBD levels at 0.8%. The buds have a sweet fruity aroma, including citrus or pine notes, with hints of blue or purple coloring.

This strain can grow quite tall, so growing and harvesting are not for beginners. You will need to have some experience under your belt before attempting to grow Blue Widow. The flowering time is 9 to 10 weeks, and the yield can be up to 500 grams per square meter indoors. Outdoors, your crop can grow up to 2.5 meters high with a yield of between 2 and 3 pounds per plant.Instead, blue