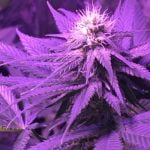 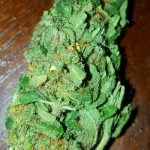 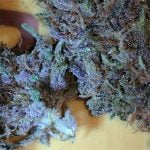 The Blue Haze marijuana strain is a great example of hybrid marijuana that has so much to offer. It has lineage from Blueberry Indica and the original Haze strain and was produced in 2009. It was made popular by the California-based dispensaries.

Blue Haze marijuana strain is great for pain and stress relief, without the usual side effects like paranoia or anxiety that come with heavier hits of marijuana. The cerebral effects of this mixture are subtle and provide the user with a sense of inner serenity, euphoria, and relaxation.

The adverse effects of this mixture are usually the same as those from other strains like paranoia, dry eyes or mouth, dizziness, and anxiety. It has a THC level of 17%, which is fairly high. It has a CBD level of about 0.5%. Blue Haze marijuana strain has a relatively short and compact growing cycle.

The Blue Haze strain grows well indoors and outdoors, making it an excellent choice for the green thumb. The marijuana strain likes vast amounts of growing space if you decide to grow this crop outdoors, as it is quite hearty. It flowers in about 7 to 8 weeks and reaches the peak of its process in about 10 to 11 weeks.

Blue Haze’s appearance is very similar to that of other hybrids. It has dense buds that are covered in frosty crystals that have a pleasing scent and taste. The flowers are pale green with tinges of blue, which give it its name Blue Haze.