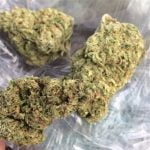 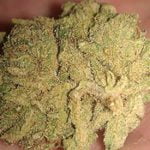 Blue Diamond descends from an Indica-dominant strain and inherits a hashy, earthy aroma. This strain is considered to be a descendant of BioQueen’s Q-Dub and DJ Short’s Blueberry. Even though the parentage isn’t 100% certain, the indica-leaning genetics develop in this strain’s cultivation. It emerged in the Pacific Northwest and is now known in the Colorado market.

Medical marijuana patients should consider Blue Diamond a treat, as it’s extremely effective in treating pain, stress, and anxiety or depression. As for recreational marijuana smokers, this Indica-dominant strain is recommended to enjoy euphoric, relaxing, and calming effects and prolonged high or sleepiness.

The known side effects of Blue Diamond include dry mouth and eyes, dizziness, and increased paranoia. The THC levels are very high at 20%, and it’s a favorite among recreational users. It’s a well-rounded hybrid with a sweet berry aroma and heady effects that are also indica-dominant in nature.

Blue Diamond finishes flowering quickly and rewards growers with large, chunky buds after eight weeks. It can thrive in a medium-sized garden and prefers both indoors and outdoors. The buds are extremely dense, producing a lot of resin, so this strain is perfect for making Hash. It’s a highly potent strain and is known both for its high yield and quality.

The medium-sized buds are light green in color with dark green leaves. Once it is cured, the buds will be covered in crystals with a fruity aroma of berries or grapes. The flavor will have notes of pine or citrus with a smooth, earthy aroma.