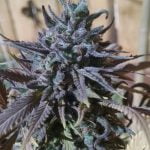 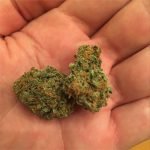 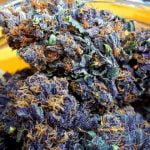 Black Cherry Soda is a potent indica-dominant hybrid strain with balanced mind and body effects and heavy yields. This strain was crossed with the Blackberry Indica clone and an unknown indica from Afghanistan, then bred back to the original Afghani mother plant.

This strain originated in Denver, CO, around 2008. This caused the strain to quickly become unpopular though it had little to do with its actual quality. However, when professional breeders later crossed this strain with the known genetic strains “Blackberry Kush” and “Blueberry,” they created a hugely popular strain that boasts both mind and body effects.

Medical marijuana patients love this plant, as it allows them to treat various symptoms such as pain, headaches, inflammation, and insomnia. The effects of this strain include relaxation, which is just right for getting rid of stress. It may also help a person to overcome physical fatigue and improve their mood.

The physical side effects consist of dry eyes and mouth due to its heavy sedative effects. Black Cherry Soda has been reported to cause dizziness and headaches from consuming too much THC, but it is recommended that patients never exceed the recommended dose for them.

This strain has a pungent odor similar to the fruit of its namesake and a flavor similar to blueberries. The buds are compact and have dark purple hues with hints of blue. Its THC levels have been measured between 16-20% on average, and they are known to fluctuate slightly depending on the region where the plants were grown and how they were bred.

The fruity aroma of Black Cherry Soda is enhanced by a sweet taste from blackberry leaves intertwined with hints of a vanilla creamsicle. Black Cherry Soda can be grown indoors and out. Flowering takes somewhere between eight and twelve weeks with a typical yield of 1 to 2 pounds per square foot.