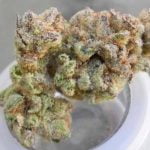 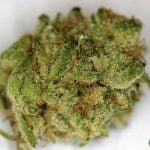 Banana OG is a popular strain of marijuana that has a lovely smell and taste. It originates from the Banana Kush strain and the OG Kush strain. Because of the genetics of this hybrid, it is known to leave users feeling pretty high. With a banana smell and taste, this bud is aptly named.

It was developed by a group of Northern California breeders before being spread around the west coast. The exact origins and details of its development are unknown, but it is thought to be a cross of a few different OG Kush genetics.

The smell and taste of this strain are much sweeter than most OG Kush crosses, like the one with Ghost OG. Its overall effects are very similar to those of the parent strains, however. As a result, medical marijuana patients who use this strain can find relief from various conditions like pain and insomnia.

The effects are mostly cerebral, offering consumers an uplifting head high that can leave you feeling euphoric and energetic. As the high progress, it will then lead to a feeling of sedation and a couch-lock. This is what makes it such a good choice for nighttime use.

The adverse effects of the Banana OG strain include red eyes, rapid heart rate, and dry mouth. In addition, its high THC count (20-25%) and the mix of its indica and Sativa genetics that give it the “Banana” name may cause some side effects, like paranoia. However, these symptoms are short-lived and typically only occur when someone has been smoking for a long time or with a friend who has also consumed Banana OG.

Growing this strain is relatively easy. Banana OG germinates easily in a hydroponic setting and will grow nicely in a flower or an indoor garden. This strain can be grown outdoors, although it may need to be grown indoors during more extreme climates.

Banana OG is a good choice for beginning pot growers because of its easy cultivation requirements and common availability. Flowering time is about 12 weeks, depending on the grower’s setup.