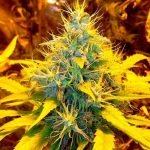 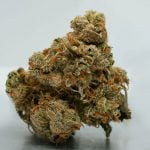 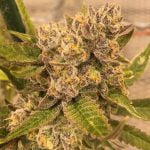 If you’re a fan of the fruity smells and tastes that we find in many strains of cannabis, then Banana Kush is the strain for you. This hybrid marijuana strain is made by crossing Ghost OG and Skunk Haze, which means it has an aroma like a bushel of bananas and a taste like fresh banana juice. The resulting product is a potent but mellow high with feelings of relaxation alongside an upbeat sense of euphoria.

Banana Kush has origins at a marijuana dispensary in California, where it was bred by the Dutch Passion Genetics strain. This strain helps with agitation and stress, as well as depression and insomnia.

Banana Kush’s symptoms also include an increased appetite and an increased sense of creativity. This strain is great for those who want to get a little creative while they’re getting high. Some side effects include dry mouth, dry eyes, paranoia, dizziness, and disorientation.

Banana Kush has an average THC level of 18%, making it an ideal choice for treating many of the common aches and pains associated with chronic illnesses while still enabling patients to retain a high level of functionality. The smell of Banana Kush tends to be overly sweet and extremely pungent, while the taste is slightly harsh but richly flavorful.

The flowering time for Banana Kush is approximately 8 to 10 weeks. Growing this strain indoors is recommended, as it does not grow well when cultivated outdoors. The average yield is approximately 250 grams per square meter of outdoor growing space.