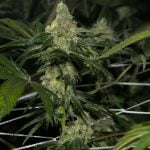 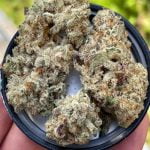 Alien Cookies by Jaws Gear Genetics is a cross between GSC and Aliendawg. It has been described as having pungent earthy and vanilla flavors coming from dark-colored buds drenched in trichomes. It emerged from Colorado.

Medical marijuana patients describe this strain’s high as being very calming, heavy, and relaxing. The cerebral effect kicks in after the initial physical relaxation takes over. That means that nausea and pain caused by chemotherapy treatments can be held under control while you enjoy the mild euphoria. Patients reported that it also helps with anxiety and depression.

The aftermath effects reported by patients include dry eyes, dry mouth, and dizziness. The THC level is reported to be above 22%. The color of the buds when grown are typically a dark brown/almost black color, but it can also appear to be intense green in appearance.

This strain can grow to be tall plants and should be kept as dry as possible to avoid mold problems. It grows best indoors, and it’s the strain that won’t grow well with lots of natural sunlight or hot conditions. The strain can grow very well in soil or hydro but produces the best effects when grown using hydro. Flowering takes approximately seven to eight weeks. The yield can reach up to 300-500 g/m2.